Consultants are brought in by a client for many reasons and one of the key reasons is their expertise and methodology.  Most firms have 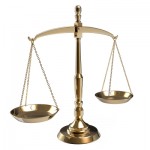 Next week’s topic: Dining with the client

How Work Gets Done: Business Process Management, Basics and Beyond